So…….Smart watches have been around for some time now (sorry) and love them or hate them if Apple and a few other companies have their way we will have some form of one over the coming years. From e-ink pebbles, hybrid analog with smart features to full on Apple watches, selection and price is giving consumers more choice. So I toyed with the idea of a pebble and with the advent of the pebble HR 2  I decided to wait, as with most of my waiting games they went under 🙁 so that was that for months until I started reading about android ware 2.0 coming out and seeing as my phone doesn’t have NFC I though this might be a good excuse to get on board. Queue several nights googling all the watches on the market and one that caught my eye was the LG Urbane 2 LTE, NFC with a good battery and has been out for about a year and a half…..i’ll pop in the spec below : 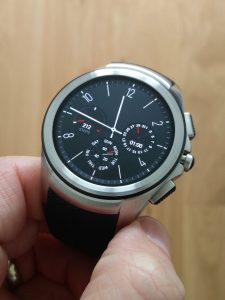 so after reading it was going to be receiving an OS update (dont let me down now google) I wanted to get a good price, did my usual searching and was finding a lot of used ones on Ebay. They were mainly stateside but I have family over in the US so this wasn’t too much of a problem. So I wanted a new one in box, from store and to my surprise I found a store in Texas selling them for £163.32 !!!  the good guys and girls at wirelessmarket1 had this listed .Free shipping to US and sealed……couldn’t resist so after a few day the watch was safely with family and a day later back in sunny England, quite a find!

First thing I noticed was the Urbane 2 has P-OLED screen at 1.38in and the resolution is an impressive 480×480 giving a decent 348ppi. So far Ive had no issues viewing this screen in all lighting conditions and the touch is very responsive. CPU is not the latest and greatest and its pulling its weight so far and its just for notifications so how taxing can they be. 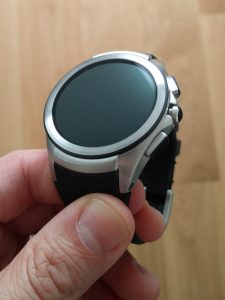 The Overall build quality feels good, I had read a few reviews about the strap being a little uncomfortable but for me this has not been an issue (and I dont usually wear watches). The steel used around the screen and sides is nicely brushed and I am hoping wont scratch to easily but time will tell. The rubber strap is a little stiff but it dose house the antenna for the watches 3G/4G radio so I skip over that as it is serving a purpose. Its chunky and so far as I know only comes in black which will please some but Apple fans have the advantage of changing straps to match their outfits 😛

Compared to a 38mm apple watch 2 is its a little bit bigger and thicker but on my wrist its not huge (and I have small wrists), but both offer the same level of features APART from the LG has LTE built in…..at the moment I have not installed a SIM so cannot comment on connectivity and battery drain but will follow up on this in a later post. One thing to point out is the Frequencies used are limited so it might not be possible to get 4G but 3G from certain mobile providers should be ok…TBC . WiFi was not an issue and as part of the paring with my phone, my WIFI setting were ported over nicely. The whole setup was super easy and straight forward. 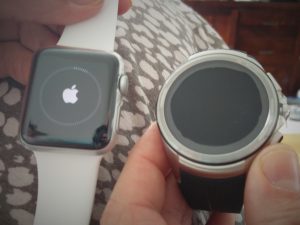 So far the heart rate monitor (yes I have one) seems to be good, I’ve tested this out while at rest and in a semi stressful environment (work) and it picked on up the changes well. I would say the LG is a good mix of fitness tracker and organizer so far and coming from a fitness-ish tracking Mi Band 2 I’ll miss the insane battery life but I am loving the screen, notifications and with OS upgrade contact less payments, yes I want to be one of those smug payees fiddling with their gadget to buy that tall, skinny, decaff moca choka adult milk shakes, well at least once in my life. so far I have 60% left at the end of the day, this will change with 3G but I’m happy so far with it and strangely its about the same as the Apple Series 2 also, I’ll keep you posted.

Last word would be on the UI, its not bad Android Ware 1.5 (I think thats what its called) seems easy to navigate around is only take a few swipes or button presses to get around. Notification pop up and are easy to dismiss, I will have to spend some time working out what I want to be notified on but so far I am happy with everything to see how it handles them and battery drain. I’ve seen videos of 2.0 and I have to say its looking good, so just a waiting game, maybe a good search after this to see if its out 😀

Stay tuned for an update in a few day for a follow up post on the highs and hopefully no lows of this LG Urbane 2.