All things electric catch my eye and I was looking at bikes for commuting to work and to potter around nearer to home, folding was a must for getting on the tube. I didn’t want just a normal bike, it needed design and tech at the level of a Tesla car level. My searches shaped my browser ads and all things being big data and targeted adverts, JIVR popped up on my Instagram feeds, really I don’t mind, especially when its something I want to look at 🙂 I registered my interest on the landing page and with an hour I had a call from a lady following on my request for more info. As it happens JIVR are big on demos and they were able to arrange for me to meet someone close to work to actually see the bike in the flesh AND take it for a test ride 😀 …… roll on several days and I met up with a friendly chap (ping me for contact details) who showed me around the bike and proceeded to hand it over for a test ride…..wow, it was very fun, it caught the attention of fellow bike riders and people outside several cafes.

Just to get up to speed on the overall tech spec, I found this on there old kick starter page, some values may have changed from kickstart to the production model 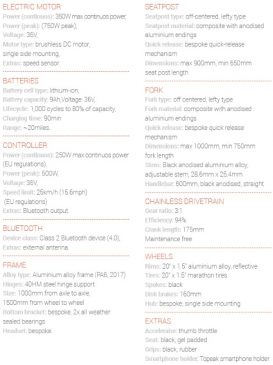 very clever design work, the JIVR can pack down to a fraction of its size in four simple steps. It doesn’t end up quite as small as some of its competition, but the positioning of its 20in wheels means that the JIVR can tag along behind you like a wheeled holdall

The motor is in the front wheel, which mounts on one side only to a monoblade fork. The same is true at the back, with a single mounting point for the rear wheel that also houses the drive mechanism

no anchor points to lock the bike which makes sense as this is a 2.5k bike

the battery is situated within the main frame of the bike too and recharges time of about 90 minutes, same battery tech as in Tesla cars

a proprietary chainless transmission that’s entirely enclosed within the bike’s frame. There’s a single gear ratio and Jivr claims that the drivetrain is 94% efficient

pedals are very low to the ground, if your a fan of banking a speed, make sure you raise the peddles on the side your banking too.

no suspension so great on the road and cycle lanes but I tested on cobblestones and you wouldn’t want more than a few minutes on riding on it.

15 to 17kg was fine also when unassisted

good design, a lot of tech but the cost is just a little too much for the average user BUT for some who can use it shave money of their commute it can pay for itself in a year.