Hi, its been a while since I updated techun.limited, works been busy and finding time has been difficult but out of the blue I finally received my Superbook by Sentio which was called Andromium Inc.

A little history and introduction to the Superbook, the Superbook is billed as the the Universal Laptop Dock that transforms your Android smartphone into a laptop. When I saw this on Kickstarter some it was priced at $99, it promised to have a 10 hour battery life, ability to charge your phone, multi-touch mouse pad, 1080p screen and back lit keys. This was a time when Samsung were not thinking about a dock for their phones.

From the outset I wanted the back lit keys, 1080p screen and a usb-c cable as I planed to use it with my oneplus 5. Just to make it clear this device uses your phone for everything and is essentially just a powered screen with pointer, No speakers! 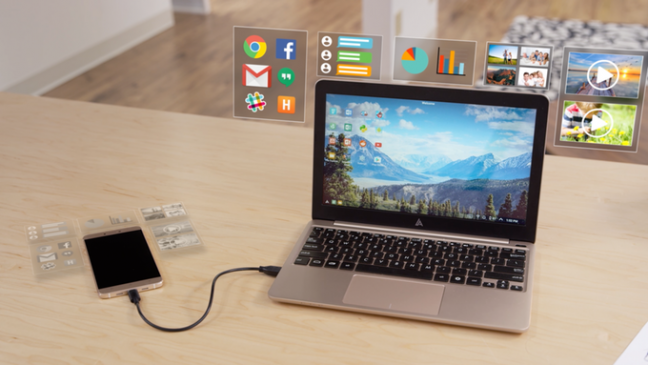 So if you wasn’t getting the updates (46 in total)  I received as a kickstarter backer you would have missed out in what has been quite a rocky road. The team had to deal with supply issues from chip suppliers, firmware issues, price increases, phone compatibility issues and finally extra taxes imposed they they were being exported from China if they didn’t clear customs in time.

So my total wait time was July 2016 till now…thats a very long time and if it wasn’t for the low price of the unit and the fact you cannot get a refund I would have given up on the idea BUT it arrived finally so the main thing is, was it worth the wait?

Well yes and no……Lets break it down into parts

Whats in my box

Carbon Effect Sticker (really not worth writing about)

The unit looks very much the part, its made out of plastic which is a little disappointing. The keyboard is very useable with a nice amount of key travel and response . The screen is also very good with it being 1080 on quite a small display, images and text are sharp, its also nice and bright.

I was disappointed with the unit in that the screen and base do not close very well so if you hold the unit in your hand like a book the device starts to open (something you would expect on an old laptop where the hinges are past their best). The unit is also not as thin as I expected and has a chubbiness that you expect on something like the old net top of 2 years ago. But remember they were housing internals that made them a standalone unit.

Something else that is a little annoying is the power supply that comes with the Superbook, its rather big and cheap looking with barrel connector which crazy in this day and age of usb-c and fast chargers that can supply they kind of voltages.

So there was not much by way on instructions other than a one page piece of paper that said the download the latest version of Sentio Desktop App from google play and they it will prompt for a firmware update. The Sentio Desktop App prompted for various setting to be set on my phone like enabling developer mode, using adb to push a command to my phone as its running android P. ok it should be good to connect and be amazed…. will it would detect my phone and would just display the connect phone graphic….hmmmm after some searching of their support pages I decided to log a support ticket….still waiting for a reply. I did some general googling and it would appear I was not along, someone mentioned pressing the fn key and the P button….connect my phone and it was on…..all be it no full screen.

I was prompted to do a firmware update as per the one pager so i did, the progress bar moved across until it was 100% and thats where is stayed. A message appeared saying it was having issues reconnecting and to press the reset button (that would be on the bottom and covered with the while sticker, so you have to pop a hole in it) and the screen when bank and then nothing, connected phone, nothing, i did connect the superbook to my mac and windows pc and it was mirroring the display which was good i guess,  I did the fn and P again and it appears, now to fixed the resolution. There was another ADB command needed to enable to resolution option in settings, did that, rebooted phone and yes I was full screen…….finally got there after 2 hours which I would say the average joe would have put in the box and sent it back (if this were from a store). Another this i have noticed is that i have to make sure my phone is in OTG storage mode??  so I have the Superbook full screen, lets test out some apps.

Well everything you open is not optimised for full screen, ok i get it and i check the box to not remind me. ok so I prime video full screen, this looks good, i go to run a video and it plays…….on my phone screen and display the X-Ray content on the superbook, what a let down! Youtube does display full screen on the superbook which is ok, I tested Kodi, boo again, it is almost full screen but there is a 1 inch black bar to the left……I’ve also noticed that my phone display also is messed up while connected so its clearly not happy. I think the issue of not showing Netflix and prime is because this uses DisplayLink technology and app. correct me if I’m wrong but this is by design by DisplayLink?

So overall there are many positive to the Superbook thats for sure but it would appear there are as many issues too….maybe if I get the app running nicely it will render the windows apps and if the keys on the keyboard mapped correctly I could cancel apps which seems to be my only use at the moment. Oh I almost forgot, it docent charge my phone when connected either.

Shame, so close but it feels rushed…..I’ll keep plugging away and report back with progress and update…..and if anyone from superbook get back to me that would be nice but have a feeling they are going to be very busy 😀

I cannot help but think a cheap Samsung chrome book would be just as good with my phone tethered to it :S

One Thought to “The Superbook by Sentio – Well it finally arrived and…..TBC”